“Presence” has become a new object of study. A small group of researcher within architecture, literature, art, anthropology, and museology uses “presence theory” as a means of studying specific artworks, events or places.

“Presence” has become a new object of study. A small group of researcher within architecture, literature, art, anthropology, and museology uses “presence theory” as a means of studying specific artworks, events or places.
It is a paradoxical term, because “presence” according to theory is the very suspension or escape of theory. Presence theory is nevertheless the subject of a three-year research project at Faaborg Museum and the Institute for Cultural Studies at the University of Southern Denmark (SDU). An upcoming international conference will also discuss “presence” in relation to art, aesthetics and museums with keynotes from, among others, British anthropologist Tim Ingold, Finnish architect Juhani Pallasmaa, and German-American literary theorist Hans Ulrich Gumbrecht.

In Production of Presence, Gumbrecht describes presence as moments of aesthetic intensity and a “[…] state of being lost in focused intensity” (104). In his view, the spectator cannot be present and analytical at the same time. Presence interrupts the work of interpretation, but enables the spectator (or reader or listener) to relate to the past in both intellectual and embodied ways (124). Dutch historian Eelco Runia describes presence as a spatial experience of history. Presence theory is an approach with "[...] focus not on the past but on the present, not on history as what is irremediably gone, but on history as an ongoing process" (8). Presence, according to Runia, suspends or circumvent the ordering of past events into grand narratives of history.

The discussion of presence ties to studies of aura, affect, materiality, phenomenology as well as a broader critical approach to aesthetics and culture. However, presence theory itself is also grounds for critique. The purpose of the “Art and Presence” research project is to use and discuss “presence” in relation to art and museums. These presence studies involve experiments with user feedback, user involvement, exhibition designs and communication as well as theoretical studies of artworks and exhibitions. The conference at SDU and Faaborg Museum is an attempt to create a cross-disciplinary forum for discussion of the effects and impacts (or lack of) of artworks and museums in present-day society. The deadline for papers is 15 January. 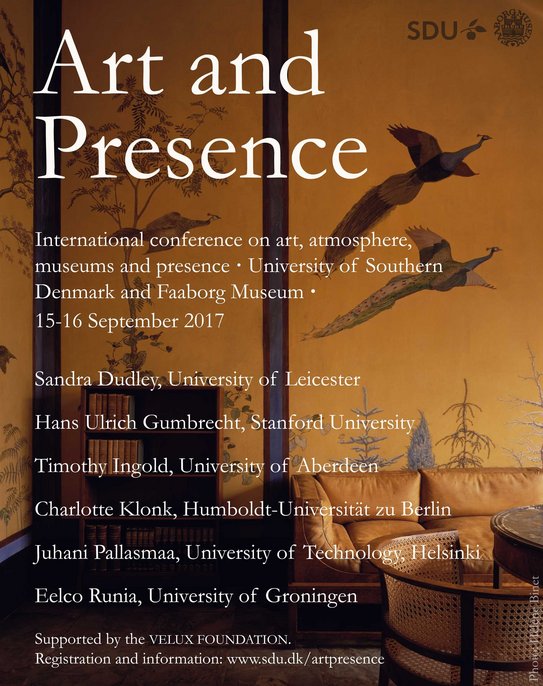 New network on participatory art in Japan and Denmark

Collaboration and Community-Building in Contemporary Art in Japan and Denmark

TAKING PART IN THE ARTS? – a conference on participatory (choreographic) art projects.

Thoughts on how and why participation? - Warming up to the network seminar