Research Should be Fun 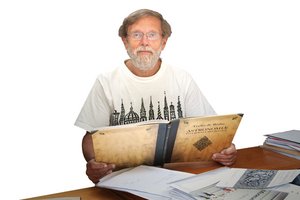 “An imaginative ideas man and an enthusiastic initiative taker”.

“Jens is Denmark’s answer to Indiana Jones. He rarely becomes involved with ‘ordinary’ aspects of our history - and if he does, they become exciting”.

The three quotes above come from portraits of medieval archaeologist Jens Vellev of Aarhus University, the researcher who came up with the idea for, and is at the forefront of, the opening of Tycho Brahe’s tomb.

Over a 10-year period, he appealed tirelessly to the Czech courts and authorities whenever he came anywhere near Prague on business or holiday. This year, he was at last granted the necessary permissions from local government, conservation authorities and the Týn Church in Prague.

The Maverick of Archaeology

The word ‘firebrand’ is one that can often be heard in association with Jens Vellev. This image is given further explanation in the portrait ‘The Maverick of Archaeology’: “…when, with wild hair, excited and with a sparkle in his eye, he opens the door and exclaims ‘listen to THIS! ....’, you cannot help but be convinced that he is constantly devising, developing and finishing one, five or ten different projects, large and small, and often with a touch of the spectacular.”

In November 2010, he told UNIvers, the Aarhus University newspaper:

“It is very important to me that research is fun. That’s why I always tell my students that it’s not particularly amusing being the 261,000th person to open a burial mound, and that they must find an alternative.”

The Renaissance Years, Salt Production, You Name It…

“Find an alternative”- this is something Vellev himself has done many times throughout his prolific career. As such, he became the instigator of Medieval Year in 1999 and Renaissance Year in 2006. On another project, an excavation of the medieval seething huts on the island of Læso culminated in the introduction of ‘Læsø Sea Salt’ to the consumer market.

An interest in antique paper production led him to the trail of Tycho Brahe, whose paper and watermark he has recreated. The opening of the world-famous astronomer’s grave and investigation of his remains, tomb and burial suit are just part of Jens Vellev’s overall Tycho Brahe project, which also includes a planned re-publication of Brahe’s Mechanica (1598) in full Danish translation, as well, hopefully, as the reconstruction of Uranienborg on the island of Hven. The archaeologist continues to give all he can to push back the boundaries of what can be achieved.

A Communicator with an Eye for the Spectacular

In 2008, he was awarded the Aarhus University prize for Research Dissemination. Jens Vellev believes in the importance of communication, and prefers projects which have a broad area of interest:

“As an archaeologist, I am driven by personal curiosity and the desire to describe something out of the ordinary. It is also important to me for a project to appeal to the general public – I like working on something that many people are interested in”, he explains.

This is expanded upon in the portrait ‘The Maverick of Archaeology’: “Jens is not really into grand hypotheses, and he is not a theorist. He has a passion for new, concrete, exciting knowledge and has an uncommonly good eye for spotting it.”

Are You Coming Back Tomorrow?

His interest in archaeology began during his school days. One day, he travelled on his Velosolex moped to a nearby excavation which he had read about in the local newspaper. It was here he met museum director and author Peter Seeberg, amongst others, for the first time – and was allowed to push a wheelbarrow. At the end of the day, Peter Seeberg asked him “Are you coming back tomorrow?”. He did, and the interest in archaeology had caught hold for good – and a working partnership of many years had begun. Medieval archaeology was the discipline eventually chosen, because:

“As I rather boldly say to my students, life is too short for flint flakes. By this I mean that when working on the Middle Ages and especially the Renaissance, the period Tycho Brahe is from, it is possible to combine physical relics with written sources – this is something I like. That way, you get the best of both branches of the science.”

“The fascinating thing about archaeology is that when you dig, unknown pieces of the past appear right before your eyes.”

Jens Vellev has, amongst other things, excavated a church in Viborg and a round church in Schlesvig. At the end of the 1960s and beginning of the 1970s, he participated in a Danish expedition in Arabia lead by Professor P. V. Glob.

“Glob got down to it. I learnt from him that it is best to just get to work – and to go for the tallest, rather than the smallest, burial mound.”